Whenever my followers are found to be whipped up into a riotous frenzy, smashing windows and stealing letterhead from my enemies and so forth, all eyes immediately turn to me. Like I held a gun to people’s heads and forced them to abscond with that lectern or suggested that they take a leak into a Congressman’s coffee mug.

Do I know that coffee mugs were repurposed into urinals? Not exactly. But my limited experience with shirtless people wearing fur hats and face paint and carrying spears is that they usually have to relieve themselves mid-riot, and if a Congresperson’s mug is just sitting there unused, well, it might as well be put into action.

There was a lack of preparation for these riots, with far too few porta-potties mobilized for such a huge crowd such that some rioters missed storming the Capitol because they were in a porta-potty line and didn’t want to lose their places. In 2021, that’s shameful.

Not to create a diversion or anything, but I’m wondering if it might make sense to award the Presidential Medal of Freedom to a few professional bowlers this week.

Several people have asked me if I expect to win the Presidential Medal of Freedom before I die. And why wouldn’t they ask that? I’m loved by millions, and I’ve done enormous amounts for the American people.

Have my actions on behalf of the citizens of our country flown under the radar, with almost no one knowing about or being able to document my contributions? Probably. Some people claim I’ve contributed nothing at all. Like that makes me unqualified! It turns out you don’t have to have served your country at all.

On the other hand, I don’t have lung cancer.

However, please alert the president that I have had many struggles with anosmia. This deserves something, doesn’t it? I know that Rudy Giuliani contends that you can’t get the Presidential Medal of Freedom with anything less than a stage 4 cancer diagnosis, but what about the Vice Presidential Medal of Good Humor? Or the Speaker of the House Medal of Coolness Under Pressure?

A couple of guys I met on the street told me that there’s a chart that is used to dole out medals, and the only way to get to the presidential medal of freedom is either to serve your country with distinction, or else get a stage 4 diagnosis. Great! This means I can’t get it if I catch my forthcoming cancer early, like stage 1. Makes me want to let that damned cancer thrive!

What’s your plan to win the PMoF?

Get Off My Hemisphere

When are the Russians finally going to acknowledge that Venezuela is not in their hemisphere? Do we have to provide them with maps showing that it’s our hemisphere? The earth can be halved into infinite distinct hemispheres, but none of them are going to include both Russia and Venezuela without serious hemispherian Gerrymandering.

On the other hand, even my naked eye can easily see how all South America belongs in the US Hemisphere. So does Canada and our southern neighbor Mexico, where people are determined to pay for our border wall if it’s the last thing they do. So does all of Europe. Throw in Turkey and Africa and you’ve got the complete US hemisphere.

The Russian hemisphere is basically Asia and the Middle East, and we threw in Australia and New Zealand, kind of as afterthoughts. Antarctica is split 50-50, but don’t touch our penguins! US children have come to love penguins and it would really be a shame for the greatest children in the greatest hemisphere to lose even a single penguin to forces external to our hemisphere.

Next thing you know the Russians are going to try to interfere in our elections. At least we know that hasn’t happened yet.

Not so long ago, I declared publicly via soapbox rantings in the town square that I would no longer plan mid-winter vacations. Too unreliable, I announced to the gathering throngs, what with the vagaries of the weather.

I was soon pressed for details. All midwinter vacations? Does that count Christmas in New York? The skepticism was palpable (fueled by the fake news media). People began to get restless. Worried that I might be pelted by rotten tomatoes, I lifted my bullhorn and clarified, as the crowds around me swelled: specifically, I would no longer plan trips to warm, beachfront destinations between winter solstice and spring equinox. After some inelegant bursts of skeptical laughter and a couple of outright guffaws from the rather large audience (“hasn’t he been to, like, Turks and Caicos?”), I explained further: winter escapes involve planes, which are notorious for failing to liftoff during snow storms. I had once been foiled by just such a scenario, confounding an otherwise perfect scheme to repair to the Big Island of Hawaii in the middle of February. Plus, what if it’s cool and cloudy during your whole beachfront trip, which happened one winter vacation in allegedly sunny Florida? No, I’m sorry, never again!

The multitudes now sat peacefully and hung intently on my every word, as I explained how this year I had planned a vacation to a winter destination instead. Weather would be no match for our four-wheel drive vehicle. There were cheers. Bring on the snow! Bring on the cold! 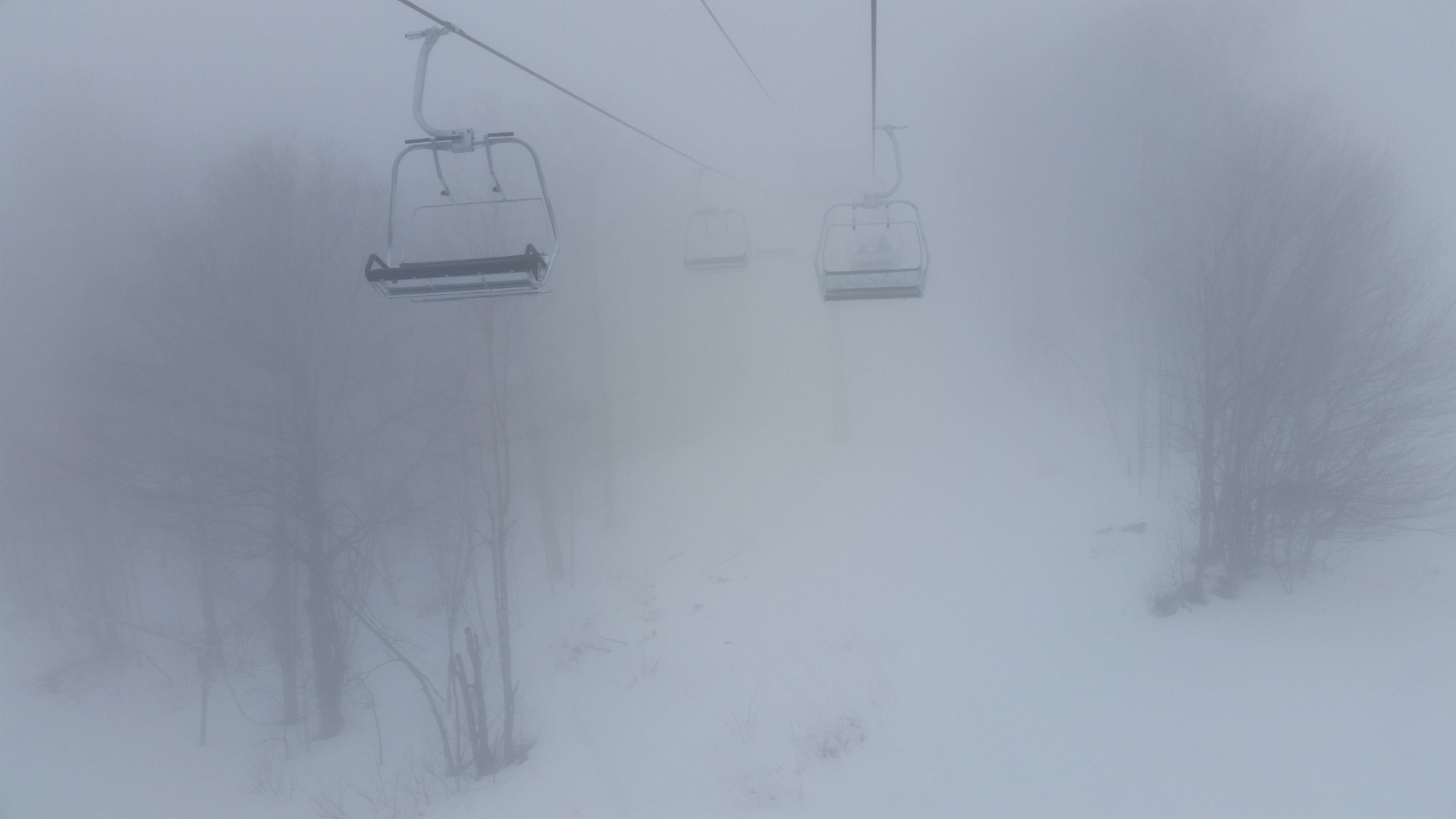 Or, bring on the rain and fog. Maybe you’ve never skied in rain and fog, but you’ve driven in it and understand: since you can’t see what’s right in front of you, you’re forced to travel super slowly. Travelling really slowly is not why people ski. And it’s also not so fun to ski when you’re wet.

I would insert here an apropos rant about climate change, but who wants to hear a rant about global warming by a person lamenting the loss of his white-person leisure activity? Better to lament the suffering of many impoverished people the world over whose low-lying shacks will be destroyed by the rising tides.

Looking to hear from an impoverished resident of a low-lying country who blogs about climate change from his/her shack.