I have made it through many calendar months of my hitherto short life without having spooned any broth, consommé, stock, or even hot water into my mouth. This is not that unusual. The warm summer months don't put me into much of a soup mood. I prefer a cold drink on a hot day, believe it or not. Occasionally, I'm treated to a bowl of creamy, cold zucchini soup by my better half, or an amuse bouche of gazpacho at a local eatery.

Recently, it came to my attention that January is National Soup Month. It turns out also to be National Hot Tea Month, National Oatmeal Month, and National Slow Cooking Month. The latter I might refer to as National Braising Month, but efforts to reach wider audiences have caused the National Month Naming Committee to go with phrasing that people can understand without having to reach for a dictionary (which, I imagine, not many people possess these days in a form that one has to "reach for"). On the darker side, January is also Slavery and Human Trafficking Prevention Month and National Bath Safety Month, the latter reminding us that not everyone has been careful enough when they draw a bath for their wee-little or aging family members. So, lots of causes to be mindful of in January.

Soup is the one drawing my attention these days. First, because the prepared food section of our local supermarket has inexplicably been unable to keep up the quality of their minestrone. It's either a supply chain problem, or a staff retention problem. Maybe both. But my wife won't eat the stuff any longer. Second, because we had a bone-in ham pre-Christmas, which gave me the opportunity to use the bone for French Canadian split pea soup a few days later. 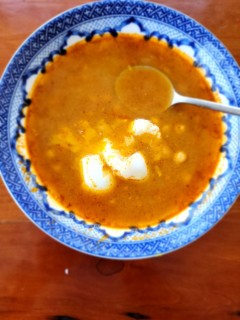 Now that we're in the middle of National Soup Month, I made a batch of chickpea and harissa soup (a.k.a "lablabi"), a Moroccan concoction (say that 10 times fast) that is far spicier than what us New Englanders are used to but is perfect on a frigid day. I've eaten this stuff three times for lunch this week, as my employer has asked me to work remotely until at least January 24th, and I have a kitchen at my disposal. Then, yesterday, in a bold move, my wife served us sausage and spinach soup for dinner. So, although I am no stranger to soup, yesterday was one of the few days in my life when both lunch and dinner were unquestionably soupy.