Lonely at the Top

A winter’s day visit to Bretton Woods, which proclaims itself to be “New Hampshire’s Largest Ski Area," ought to result in lift-line chat with the kids and efforts to avoid out-of-control teens on snowboards. But temps in the 40s and wind-driven rain tends to dampen the spirits of many a skier, including my own offspring, who chose to stay in bed and construct objects with “Zoobs” rather than get soaked. Having spent money in January on a motel room and 2 days of mid-March skiing in the upper reaches of the White Mountains (not to mention dropping $500 on new ski equipment), I was not to be dissuaded. I bade farewell to the family at 9 in the morning, hoping there might be a break in the weather. Alas, the rain only came down harder. 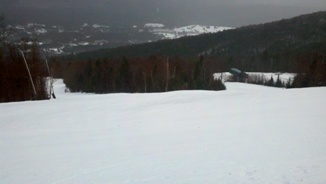 Where the heck did everyone go?

To add to my misery, I left both pairs of ski gloves back in the motel, and was left to ski with a pair of cotton knit mittens that my wife had left in the car, which were cute and all, but soaked up water like a sponge. I got in 7 runs and left with my fingers tingling less than 2 hours after I started. The silver lining was that I was able to ski as fast and furiously as I wanted and encountered only 5 other skiers that morning. (Also, I didn’t lose control and end up in the woods without witnesses; if I had, I might still be there today.)