A friend of mine, having drunk (unassisted) a 22-oz bottle of my high-gravity Belgian Trippel, which required him to rest his brain for the ensuing hour or so, asked me recently (or rather challenged me) to brew something a wee bit less powerful. “Like a heather ale,” he suggested, having enjoyed several of these at a Scottish pub called The Haven.

Sure, I’ll just get online and find myself a good extract recipe for a heather ale, my friend. Of course, all the recipes I come across require an ingredient called "heather." 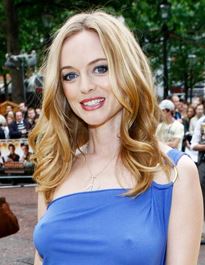 Brewin' With HeatherThis makes me wonder: what, exactly, is heather? Google, which currently controls every atom on this earth, can help with that! A quick search for “heather” results in a few pictures of flowering evergreen shrubs, and several thousand images of women, one of which reminds me that that I once had a thing for Heather Graham (after Boogie Nights, who didn’t?).

I modify my search to “fields of heather,” and soon find myself at a Yelp page where people are posting their opinions of a bakery in Chester, Maryland called Fields of Heather. No, what I want to know is “where to find heather in the northeast,” imagining that I might cut flowers from a wild shrub to dry-hop my brew. Instead, I discover that someone named “Heather Northeast” is on Facebook, and based on a photo she has (perhaps ironically) posted, seems to have traveled to Southeast Asia. I try once more with the search term “wild heather.” The Internet Movie Database tells me this was a film made in 1921, whose storyline is “A dying senator weds a girl reporter to make her guardian of his three sons.” (A rather curious selection for a guardian, though I imagine the senator's boys didn't argue with him about it.)

Tweet
Tags:
Eating and Drinking
The Best Song In The World
Whom Do You Love?