I’m planning to have my agent get me a meeting with Hollywood producers so I can pitch a new thriller about interference in the 2016 elections, which is based on my book “All the President’s Courtesy Diplomatic Appointees.”

No, I haven’t written my book yet, but this is a book that is destined to write itself, or so I’ll lead unsuspecting Hollywood producers (who are dying to meet me) to believe. I’ll tell them that while Robert Mueller and co were wasting their time on the story about Russia interfering in the fake 2016 elections, I was investigating the true interferers – Latvia, Lithuania, and Estonia.

These three fake countries have long been meddling in US elections and using fancy smoke-and-mirrors schemes to make it look like Russia was the meddler. No wonder Vladimir Putin is so frustrated with us. Makes him want to take off his shirt and ride a white horse!

Meanwhile, I’ve hired an assistant to sort out which countries should be preceded by the word “fake.”

I’m not much of a folk singer, but if I were one I’d be writing folk songs like “Blowin’ a Whistle.” My songs of rebellion would be aimed squarely at “The Man”. Troubadours would be singing my songs in subway stations, with their guitar cases laid open and piles of CDs put out for people to buy, filled with folk numbers by Seeger, Guthrie, Dylan, and me.

Wake Up, For Cryin’ Out Loud! would be my first, breakout album. Songs like “You Can’t Possibly be Serious,” and “It’s no Longer Funny, People”, would start to appear on critics’ lists of top hits, and everyone would marvel at my ability to be both humble and kind, and yet have an attitude. Sounds impossible, but the magic of my folk song art is my humility/attitude continuum. My song “Ramblin’ Tweet” would crack the top ten, and “If I had a handgun (I’d shoot it in the morning)” would get to number three.

What songs would you sing if you were a folk song artist?

Back in the day, I had a strong belief that if you worked hard, paid your dues, and attended rock concerts in large venues, you’d experience the very best that life has to offer. I grew up in a small and declining city, where we braced for the icy grip of winter by drinking a lot of beer and urinating wherever the hell we wanted. That was the way it was back then: hard work, dues paid, large rock venues, and urinating regularly.

A bit of fiction, perhaps, although I did witness certain unnamed jerks peeing all over creation back then, into the pool, into the fire pit, and so forth. And the large venue rock concerts were a real thing, with people blowing huge plumes of pot smoke into the air, poisoning themselves and everyone around them.

It was awesome! I saw bands like The Who, Pink Floyd, and The Rolling Stones while packed in with drunk young people who threw up all over themselves. And then, I saw that some formerly hugely famous bands suddenly couldn’t fill those large rock venues and would instead play in bars. Bars! The very thought!

Now I can’t seem to bring myself to see the large rock show, unless it’s Radiohead. Instead, I prize the small venue.

Enter Billy Bragg, your favorite folk-punk love troubadour of yesteryear. Turns out Billy and his East London-esque accent were in town to play the tiny Sinclair in Cambridge, MA, easily the best small venue in the area, with great sight lines, reasonable crowd sizes, and actual urinals for us to use. Tickets went on sale in late 2018 for a late 2019 show, so the nation’s most acerbic high school principal had to clue me into tickets and encourage me to buy two pair, which I did while drinking beer and then going off to urinate.

I’ll admit I was a little worried about this show, as I was bringing my lovely bride of 16 years, who attends stand-up rock shows about as often as Jesus did, but seemed game enough if we could stand in the back. We did better, standing some 20 yards away on a secure balcony, with a clear view to Billy and his lefty anti-Trump, anti-Boris Johnson message. 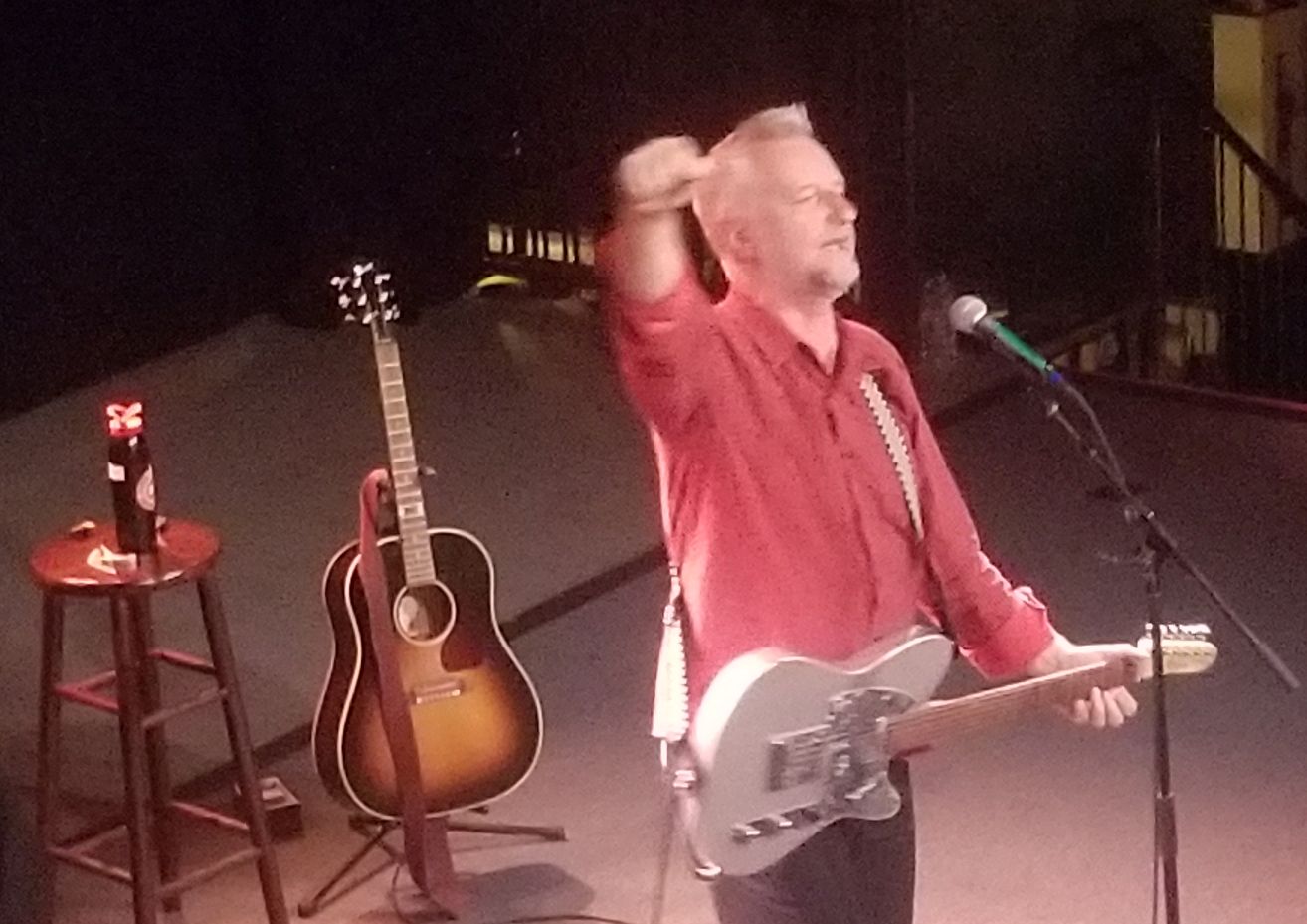 I won’t go through all the songs, as you can always find those by going to setlist.fm, but I will tell you that for about half the show he was talking activitism, and in this bitterly divided world we currently live in, his message was enormously well-received in one of the most left-leaning cities in the US.

A few decades from now, when I’m officially retired, I’m going to use my newly-freed-up time to produce and star in a TV show called “Ninety Something.” My ninety-something friends and I will get involved in all kinds of crazy schemes and hi-jinx – old person style. We’ll rob banks in wheelchairs and the security guards will laugh at us as we use a little joystick to roll away. Yeah, right, like they can’t catch us.

But they can’t. Because once these lazy-ass security guards finally stop weeping from all the laughter, we ninety somethings are long gone, picked up in wheelchair vans and spirited away, rolling down our windows to flip the bird to those dumb-ass boneheads now running after us with a beltful of zipties. (“Stop! Stop, I say!”)

Then we’ll hang in our high-end assisted-living pads, which we can afford because we’re robbing banks. To celebrate our late-in-life financial success, we’ll order cannabis to be delivered, and then us nonagenarians we’ll get all baked like we did back in the 1970s and ‘80s, using the same carcinogenic methods we used back then. The assisted-living staff will freak out, but we’ll be like, “Yo. Chill. What’s the worst that can happen? Like, what, we might die?”

And then everyone has a good laugh!

Note that the security guards (above) are Brits. (No idea why).

Isn't it nice when
Countries help rebuild neighbors?
Thanks to Saudi A!

Russia: "nothing to
do with meddling." Why isn't
Hillary looked at?

The Special Counsel
Is UNCONSTITUTIONAL
I’ve done nothing wrong

The soon to be released book
Looks like a big hit

Together with the witch hunt:

We don’t have a wall

Not going to have a country

Trade Wars are good and

Easy to win. They get cute?

With Russia: a total hoax

Kim Jong Un, I too

Have a nuclear button.

And my button works.

Prob'ly "Person of the Year"

I took a pass. Thanks!

When will top executives

Be fired for Fake News?